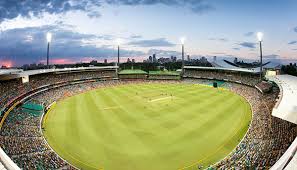 Australia and Australians love their sport, and the good residents of Sydney are no different to their countrymen. One of the most popular sports to watch and play is cricket and Sydney Cricket & Sports Ground is one of the world’s most iconic sport stadiums.

Sydney Executive Coach Charter are the experts at conducting group transportation to and from the Sydney Cricket & Sports Ground, if you are thinking of a trip in the near future then contact our friendly team today.

The SCG dates back to 1851, when the North Devonshire regiment cultivated 25 acres of land into a military garden and a cricket ground. Then years later it has grown into one of the most famous sporting arenas on the globe.

In 1928 the SCG had its record attendance for a cricket match, the old rivalry pitted Australia against England once again and 58,446 people crammed into the SCG to witness the spectacle. The stadium has been altered during time and now the capacity is down to 48,000 but in far more comfort.

The SCG has hosted athletics, baseball, tennis and cycling, but its major sports has been cricket and, more recently, various codes of football.

In 1998 the Sydney Football Stadium (Allianz Stadium) was constructed adjacent, and the SCG facilities expanded and were also upgraded.

In February 2014 a great milestone was achieved, in that the date marked 160 years since the first press report of a sporting occasion at SCG. Ever since, media from around the globe have made regular pilgrimages to this famous old stadium.

More sporting history has been commented on from the SCG than any other sporting venue in Australia. The Media Hall of Honour pays tribute to their efforts past and present.

Richie Benaud is a legend of Australian cricket both on and off the field. He captained Australia in 28 of his 63 Tests and did not lose a series as captain. Benaud was the first man to complete 2000 runs / 200 wickets double in test cricket.

Benaud combined playing with life as a journalist and then moved into the commentary box later in life. His name became synonymous with televised cricket both in Australia and England.

Jack Fingleton opened the batting for NSW and Australia during the 1930’s before achieving further fame after the Second World War as a journalist and author.

Fingleton appeared in three Tests during the bodyline series and was a regular in the Australian team from 1935 to 1938, at one point scoring five centuries in six tests. He also worked as press secretary to PM Billy Hughes and joined the Canberra press gallery until 1978.

The SCG is famed throughout the world, both as a venue and the people who have played and contributed to sport over the years.